A Lifeline From NOLA to Palestine
With Honoured Guest GEORGE GALLOWAY, Member of Parliment 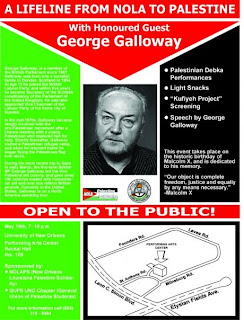 George Galloway is a British politician, author, and broadcaster, who has been a Member of Parliament (MP) since 1987 and is known for his outspoken socialist and anti-Zionist views.
Galloway is perhaps best known for his vigorous campaign to both overturn economic sanctions against Iraq in the 1990s and early 2000s, and to avert the 2003 invasion of that country,
THE EVENT WILL ALSO INCLUDE:
--- PALESTINIAN DEBKA PERFORMANCE
---"A KUFIYEH PROJECT" SCREENING
--- LIGHT REFRESHMENTS WILL BE SERVED
Posted by New Orleans Palestine Solidarity at 3:19 PM 1 comment: