MASS DEMONSTRATION IN NEW ORLEANS
NO MORE KILLING IN OUR NAME!
MARCH 29TH, 2009
On Sunday, March 29, 2009 AIPAC - the pro-Israeli lobby - will be meeting in the French Quarter. They will be sending the message that New Orleans supports the recent killings in Gaza, and the continued military occupation on the Palestinian West Bank.
We say no more killing in our name!
On Sunday, March 29, hundreds of New Orleanians will stand up for justice and against racism.
Please help spread the word!
10am
Start at Poydras Street and Convention Center Blvd
Also spread the word via facebook,
http://www.facebook.com/event.php?eid=57173614445 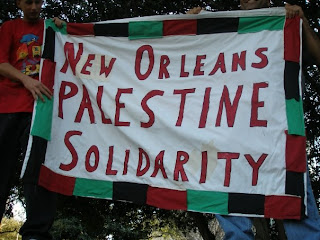